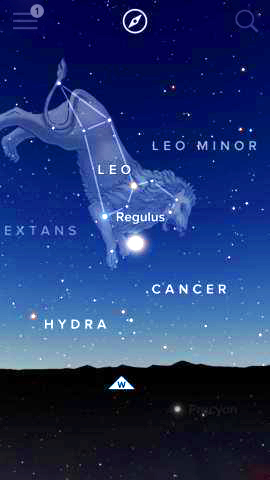 Have you looked up lately? The Jupiter & Venus conjunction will be visible around sunset for the next few nights. Is what some are calling the ‘The Star of Bethlehem’, supposed to be a sign in the heavens?

CNN: Jupiter and Venus will culminate a month-long dance with what astronomers say will be a dazzling display, appearing just a fraction of a degree apart from one another in the night sky — a show that some astronomers say could account for the ‘Star of Bethlehem’ mentioned in the Bible.

The two brightest planets in the night sky are Jupiter and Venus. I got this screen shot on my phone as they aligned over the Lion of Judah. Is this a sign of Revelations? A sign of the last days?

What some are calling ‘The Star of Bethlehem’ is said to have joined in the constellation of Aires during the birth of Jesus. The constellation is symbolized as the lamb. The Jews understood that the lamb, the Messiah, was to come into the world to save them. When they saw the super power stars align on the lamb, Aries, they may have deemed it the sign of the Messiah’s birth. They Magi understood that the lamb was meant to die, to save the world, and so they brought Myrrh among their gifts, which is used to embalm the dead.

Jesus, our lamb and Messiah, did not stay in the tomb. He rose triumphantly, and the Bible depicts Him as the Lion of Judah, who is coming back to take claim of His kingdom! As the super powers of heaven align on Leo maybe we should give thought to that.

– Gen. 1:14-16 – Then God said, “Let lights appear in the sky to separate the day from the night. Let them be signs to mark the seasons, days, and years… God made the stars… And God saw that it was good.

Let’s talk about the stars for a moment:

– Job 38:4- 7 – “Where were you when I laid the earth’s foundation? Tell me, if you understand. Who marked off its dimensions? Surely you know! Who stretched a measuring line across it? On what were its footings set, or who laid its cornerstone—while the morning stars sang together and all the angels shouted for joy?

Did you know scientist have recorded the light waves of stars and converted them into music? You know vibrations create color, sound, and light. Scientists can tell how big and how hot a star is from the sound it makes. Can you image what the stars sounded like when they were bursting forth into creation? Job tells us it sounded like singing and shouting with joy!

Click here to hear Louie Giglio teach & demonstrate natures voice
Some of Giglio’s message is a little corny, and altered, but it gets the point across. While we’re down here bickering about what the right way to worship is, all of creation is out doing us, simply by doing what God created it to do. Love, then, would be our highest form of worship, since that is what we were created to do.

God gave us freewill, and with freewill comes the ability to make a choice. There was a true & false Tree of Life in the garden. One was life found in Christ and one was based on the knowledge of good and evil, and our own ability to save ourselves. 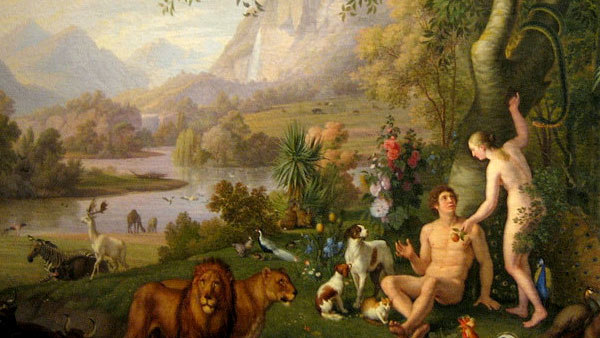 the true and false gospel (tree)

Well, there is also a true & false Zodiac. God made the stars and said they were good. He has a good plan for the stars He created, and that plan has been perverted by other religions and sciences. The Zodiac simply means ‘the path’ or ‘the way’. From a primitive word, zoad, which comes from the Hebrew sodi, and in Sanskrit means: ‘A Way,’ ‘A Path,’ ‘A Step.’ We know that Christ is the Way, the Truth, and the Life, and that He is the only way to God (John 14:6). God does however mention the Zodiac in the Bible, so let’s look at the true & false purpose of the stars:

– Job 38:31-32 – Can you bind the chains of the Pleiades or loose the cords of Orion? Can you lead forth the Mazzaroth in their season, or can you guide the Bear with its children?

Mazzaroth is a Hebrew word that means ‘The Constellations of the Zodiac’.

– Ps. 19:1-3 – The heavens are telling of the glory of God; And their expanse is declaring the work of His hands. Day to day pours forth speech, And night to night reveals knowledge. There is no speech, nor are there words; Their voice is not heard. Yet their message has gone throughout the earth, and their words to all the world.

God’s perfect purpose for the stars, and heavenly bodies, are to 1)be signs, seasons, days, and years for us, 2)to proclaim the power and glory of God, and 3)to preach the gospel message. 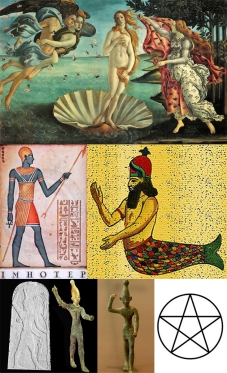 – Deut. 18:9-12 – When you enter the land the Lord your God is giving you, do not learn to imitate the detestable ways of the nations there. Let no one be found among you who sacrifices their son or daughter in the fire, who practices divination or sorcery, interprets omens, engages in witchcraft, or casts spells, or who is a medium or spiritist or who consults the dead. Anyone who does these things is detestable to the Lord; because of these same detestable practices the Lord your God will drive out those nations before you. You must be blameless before the Lord your God. 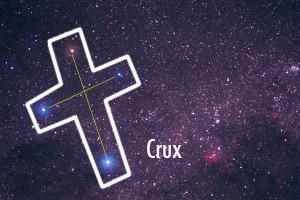 There is rampant perversion of God’s creation, but God still tells us that there is a true, God-given purpose for the stars. God says the stars proclaim His message; and that is the message I would like to present to you now:

Back to the beginning of this blog post, I posed the question: The two brightest planets in the night sky are Jupiter and Venus. I got this screen shot on my phone as they aligned over the Lion of Judah. Is this a sign of Revelations? A sign of the last days? Let’s look!

Leo, the Lion, in Hebrew, Arabic, Coptic, & Syriac means, ‘He that Rends, That Tears Asunder’. The Lion represents the King of Kings. Jesus was the Lamb of God, who meekly and humbly laid down His life to save the world, but at His second coming He will come in great power and glory. The Lion of the tribe of Judah.

The chief star, situated in the lion’s breast, whence its mighty paws proceed, bears the name of Regal, which means ‘The Treading Underfoot.’

Some of the other stars in Leo are:
Denebola, which means ‘The Judge,’ ‘ The Lord Who Cometh Quickly’
Zosma, meaning ‘The Shining Forth,’ the ‘Epiphany’
Mincher al Asad, meaning in Arabic ‘The Punihsing’ or ‘Tearing of Him Who Lays Waste’
Al Defera, meaning ‘The Putting Down of the Enemy’

A clear picture of Christ’s soon and final judgement.

Lion of Judah treads on that age old serpent. The cup of wrath is poured out and the birds of the air devour the corpse

Hydra is a great serpent. We see Leo trampling him underfoot in the heavens. This reminds of the ‘protevangelism’, or the first presentation of the gospel:

The great Serpent was first seen at the center of the ecliptic. One of the stars in Draco, The Dragon, was originally the Pole Star located at the very center. This represents Satan in the Garden of Eden and Hydra represents his being thrown out. Hydra is positioned outside of the great circle of the ecliptic. He is about to be finally destroyed by Christ and cast into utter and final darkness. 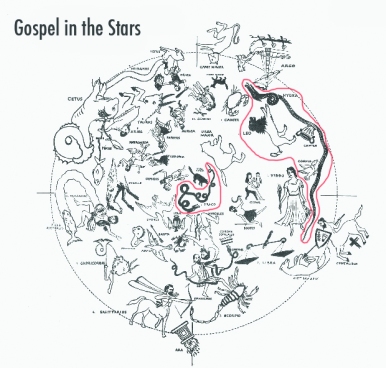 The dragon was in the middle of the garden, but he was cast out. That age old serpent will be bound for eternity

Hydra means ‘He Is the Abhorred.’

Some stars in Hydra are:
– The brightest star, located in the neck of the monster, called Al Phard, meaning ‘The Separated,’ ‘The Excluded,’ ‘The Put Out of the Way’. The Bible tells us that he (Satan) will be bound with great chains and cast into a bottomless pit.
– Minchir al Sugia, meaning ‘Tearing to Shreds of the Deceiver’. The Bible often says Satan is the deceiver.

With Hydra, we see two items placed on his back: 1)The Crater, The Cup, and 2)Corvus, The Raven.

Crater, The Cup:
– Rev. 14:10-11 – he will drink of the wine of the anger of God. It is mixed in full strength in the cup of God’s anger. They will be punished with fire and burning sulphur in front of the holy angels and before the Lamb. 11 The smoke of those who are being punished will go up forever. They have no rest day or night. It is because they have worshiped the wild animal and his false god and have received the mark of his name.
– Ps. 11:6 – He will send down fire upon the sinful. Fire and sulphur and burning wind will be the cup they will drink.
– The cup is fixed right on the back of the serpent, Hydra. In fact, 2 of the stars that make up the cup are also a part of the Serpent.

Corvus, The Raven (the back of the serpent):
– Prov. 30:17 – The eye that mocks a father, that scorns an aged mother, will be pecked out by the ravens of the valley
– 1 Sam. 17:46 – Today the LORD will conquer you, and I will kill you and cut off your head. And then I will give the dead bodies of your men to the birds and wild animals, and the whole world will know that there is a God in Israel!
– Rev. 19:17-18 – Then I saw an angel standing in the sun, and he cried out with a loud voice, saying to all the birds which fly in mid-heaven, “Come, assemble for the great supper of God, so that you may eat the flesh of kings and the flesh of commanders and the flesh of mighty men and the flesh of horses and of those who sit on them and the flesh of all men, both free men and slaves, and small and great.”
– Rev. 19:21 – The rest were killed with the sword coming out of the mouth of the rider (Christ) on the horse, and all the birds gorged themselves on their flesh.
– This is a clear depiction of Armageddon.

Worship:
Stars In The Sky, by Kari Jobe
People Get Ready, by Misty Edwards
Days of Elijah, by Judy Jacobs